That meant, she had four teens in the house at the same time.  Bless. Her. Heart.

Meal times meant doubling or tripling recipes to feed the bottomless pits that we were.  Meals also needed to be easy to make.  Because of the constant "GO" lifestyle we led, it was difficult for her to have the time to find new recipes.  There was no Pinterest people.

That meant that we had the same meals over and over again for quite a while.  No biggie, the rotation was big enough that we rarely had something too often.

For some reason (probably the ease of the meal) we had goulash twice as often as anything else.  That might be an exaggeration...but not much.

One time there was still leftovers of the pasta/hamburger combo still in the refrigerator when she made another batch.  Not an exaggeration.

We give her a hard time about goulash.   She takes it good-naturedly

I lost my love of goulash well before graduating from high school.  It's been over 10 years since I have had it.

Back to present day.

While surfing Pinterest and looking for some new recipes to try, I came across this little gem.  Cheeseburger Skillet.  Different. Simple. And easy to make a healthy version. 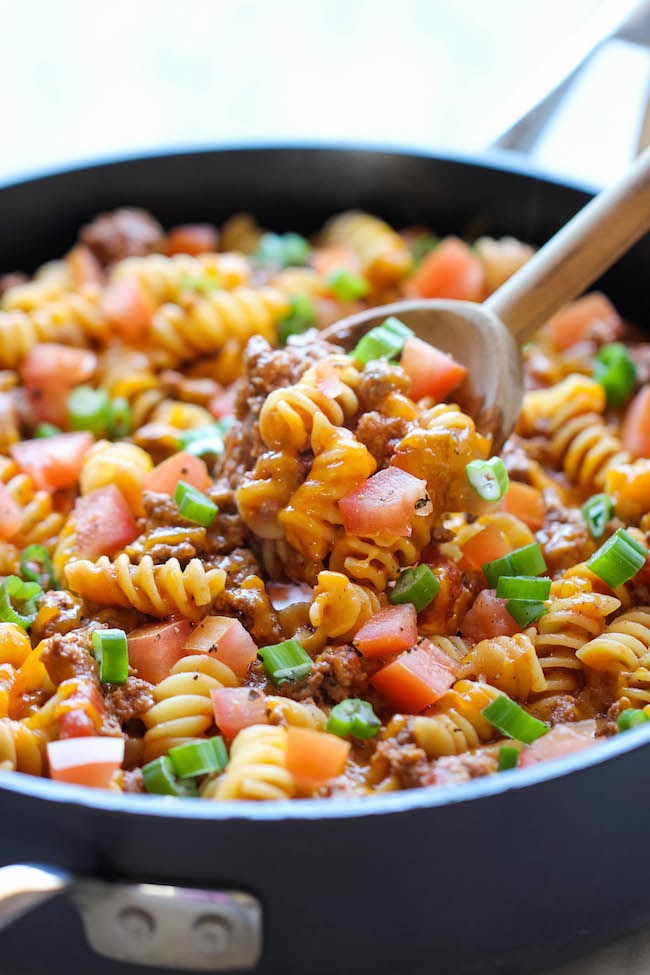 I made the dish this week, and even though it didn't look as pretty as the picture above, it hit all the things I wanted.  Low-sodium chicken broth, 93% lean beef, whole wheat noodles, no-salt added tomatoes.  This one is going in the rotation!

And then I took my first bite.

It's goulash.  It may have been 10 years since I last had it, but I know that taste anywhere.

It's a prettier version, but still goulash.

My mother will give me a hard time once she reads this post.

And I will take it good-naturedly.
Posted by Jill at 12:14 PM No comments:

There are many things in life that can make you draw your breath in a moment of fear.  Spiders.  Strange noises when you're home alone.  Clowns.

But as a mother, there is one thing that can make your heart sink and your breath draw in just as fast as any of those items above.

The baby monitor at night.

Especially after you have finally gotten baby to sleep for stretches of hours...like eight hours.

Yep.  Little Katerina is sleeping consistently eight hours at night before waking up to eat and then she'll sleep another 4ish hours on top of that.  It has been wonderful.

But I've been soft.

I have been letting her sleep in the swing all night.

But things have been different with little Kit-Kat.

I still didn't let her sleep in our room longer than 2-3 weeks...and that was longer than I wanted to.

But once she started sleeping well in the swing she stayed there.  I kept promising myself that I would transition her to the crib before going back to work. HA!

By then the FEAR had set in.

You see...with Jackie, if she woke up often and had a bad night (which was rare, but did happen) I had four and a half months of maternity leave.  It was during the summer and we were home all day by ourselves.  If she had a bad night, we could lounge around all day and nap whenever we wanted.  It worked great.

But this time...I went back to work after 9 weeks of maternity leave.  Which is better than 6, I got lucky with Christmas Break added in there.

Once Kat started sleeping great I was scared.  Scared of trying to be the kind of teacher and mommy I was before baby came along without much sleep.  Scared of getting sick because of lack of sleep. (There is something here folks...I get sick when I'm not getting good sleep.)  Scared of being exhausted and tired while trying to keep a climbing toddler from scaling the bar stools or the shelves in the pantry.  There would be no recovery days from bad nights. I have a toddler.  A VERY active toddler.

We have a routine, and it's a good one.  But much of that relies on Katerina and how well she sleeps.

But that's all going to come to an end.

This morning I went to get her out of the swing...and I smelled it.

Not poop.  I would have welcomed the smell of poop over this.

The smell of burnt rubber or burnt something mechanical.

The smell of the motor in the swing.

The swing was on...no swinging was happening.

The engineer inside my husband is going to look at it and see what he can do, but for now I am dreading the night.

Because fear or no fear, Katerina is sleeping without the motion of the swing tonight.

Maybe I'm overreacting.  Maybe she will surprise me.  Maybe this will end up a smooth transition to the crib.

~  My energy level is SOOO much better now that I'm focusing on putting good quality food in my body and I get a boost with my SPARK!

~  The first time I did the challenge I did struggle with resisting my sweet tooth.  This time I have found that fruits and yogurt can satisfy that craving.  And if I'm DESPERATE for some chocolate, a few chocolate chips or a couple of chocolate covered almonds are quire satisfactory!  I am easily able to resist other sweets that I don't LOVE.  Such as the cupcake with a mountain of frosting delivered to me today...I don't love cupcakes, I definitely don't love frosting, so I can easily pass.  Love the words of my sister..."If you LOVE it, then have a little, if you don't, then DON'T" :)

~  Ethan Successes:  Apples and natural peanut butter have become his GO TO snack.  He TRIED EVERYTHING that I made during these 24 days.  Even spaghetti squash!  Pre-Challenge Ethan would have scoffed and said, I don't like that.  Instead he tried it and I got "it's ok" or "It's not bad" response.  He discovered spicy hummus, tried sweet potato fries, turkey sausage, and egg whites.  He has gone from dipping chicken in GOBS of ranch and BBQ sauce, to just putting a small amount on his plate and portioning it out better.  His pants are saggy :)

~  I like oatmeal!  Let me say that again in a way that more expresses my excitement.  I LIKE OATMEAL!!!!!  I have been working on liking oatmeal for over 10 years.  The first time I tried the challenge, I gave up on trying to like oatmeal.  This time, I was determined.  Now, I want it EVERY.SINGLE.DAY.  So warm and yummy.  My secret way to love it...cinnamon and a small scoop of natural peanut butter with sliced bananas.  My mouth is watering for it as I type...  This is such a huge achievement for me.

This is all great...but what's next?

I have said this before and I will continue to say it.  The 24-Day Challenge is a STARTING POINT, not a destination.  It takes 90 days to change your metabolism.

The Challenge helps give you a good base.  A place to start.  Begin developing good, healthy habits that are REALISTIC.  Habits that you can stick to for 90 days and beyond.

I am continuing to cook like I was during the last two weeks on the challenge.  Whole wheat.  Veggies.  Fruit.  Greek Yogurt instead of sour cream and regular yogurt.  Mixing my own seasonings.  Brown rice. Trying to stay away from prepackaged snacks.  I try to follow the Challenge eating guide 80% of the time.  This helps me continue to make permanent habits as well as gives me the freedom for those faculty parties, pizza Fridays, and that yummy ice cream.  Everything in moderation!

The 24 Day Challenge is just the tip of the Advocare Iceberg. There are so many wonderful products that help promote healthy living.  If you would like more information, please contact me, or click HERE
Posted by Jill at 10:52 AM No comments: