Vacation in the Rockies!

Two tickets to see the Colorado Rockies vs. Arizona Dimondbacks...two nights in The Curtis, the hippest hotel in Denver...dinner at various sports bars downtown...a drive through the mountains...First vacation away with Ethan...Priceless.
Ethan and I took our first vacation together over Labor Day weekend. He proposed the idea early in August when he was browsing the Rockies baseball team's website and noticed that they played at home that weekend. Ethan is a huge Rockies fan, but hadn't ever seen them play in Coors Field. I hadn't ever seen the mountains...or even set foot in Colorado for that matter, so it didn't take much to convince me that it would be a fun trip. A week later, we had tickets bought and hotel rooms booked. It was set.
We left early Saturday morning on our 8 hour jaunt across KS and most of Eastern Colorado. I started out driving since E had just come home from Lincoln the night before and was sick and tired of driving. We had all the necessary materials for a long car ride; GPS, DVDs, and snacks (pretzels and jolly ranchers). Unfortunately Dillons does not sell Mad Libs, so no fun word games for us. We quickly began the alphabet game (I won) and even saw a high speed car chase (going the other way). I also found out that Eastern Colorado is just as drab and boring as Western Kansas. 7 hours driving full of nothing but flat land for days... 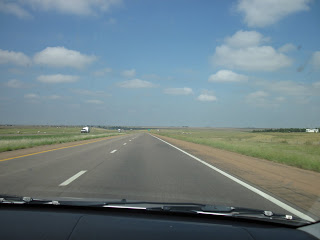 Then finally I got to see my first glimpse of the mountains and Denver...unfortunately it was a cloudy day, so it wasn't too clear. We checked in to our hotel, The Curtis, located smack dab in the middle of down town, and is the "hippest hotel in Denver" (which we booked for a discount thanks to hotels.com). 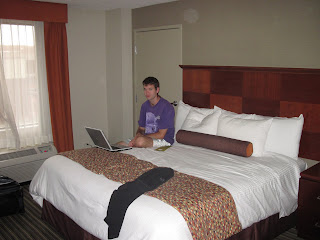 The Rockies played on Saturday night, but we had tickets for the Sunday afternoon game. We decided to just go into one of the sports bars across from the stadium and have dinner, a beer (or three...) and watch the game. After 3 innings and eating an enormous amount of food we decided to walk off some of our chili fries and finish watching the game at the hotel. Well on our way out we got stopped by guys who were still trying to sell tickets. We talked them down from 10$ each to 5$ each and ended up going into Coors Stadium and watching 4 innings of the night game! What a fun, unexpected addition to our weekend! 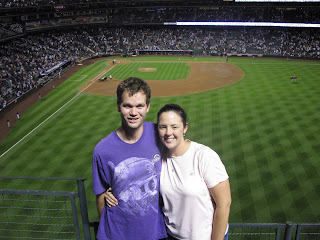 Sunday we got up early and walked to church. From the outside of the building it looked like any normal Catholic Church, but when we walked in, both our mouths dropped. Gorgeous! 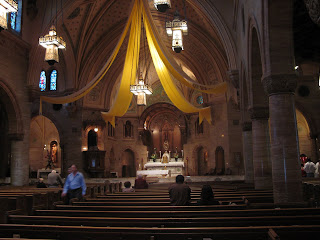 I am pretty easy going and don't usually have any real "demands" on things I want. (Ethan might tell you different...) but I knew that one thing I really wanted this weekend was a hot dog, peanuts, and a beer at the ball game. Well this was not going to be a problem, because Coors Field is a "fan friendly" stadium. You can bring in any food or drink as long is it's not alcohol or glass. We bought our hot dogs, peanuts, and waters outside the stadium for 1/2 the price and brought those into the game. The beer was bought inside the stadium (for a ridiculous price...but hey, it's our vacation!) It was a great day for baseball with 7 home runs between the two teams and a Rockies win of 13-5! 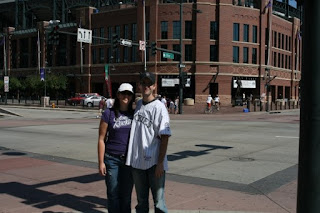 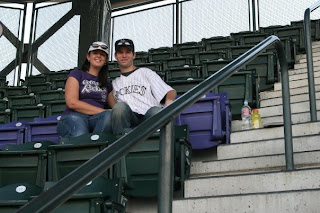 After the game Ethan suggested we take a drive out to the mountains so I could really get a good view of them up close and personal. We decided to drive out to Breckenridge and have dinner. It was beautiful, and such a great day. We stopped to take pictures and the mountains are just breathtaking! Ethan was such a great guy, driving us there and back. 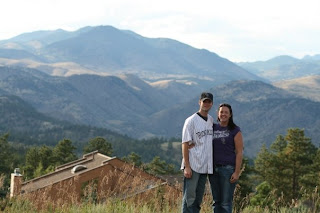 Unfortunately all good things must come to an end, and so did our vacation. Monday morning we packed up and head back to KS. It was a WONDERFUL trip which will hopefully be the first of many Labor Day Colorado Trips for us!